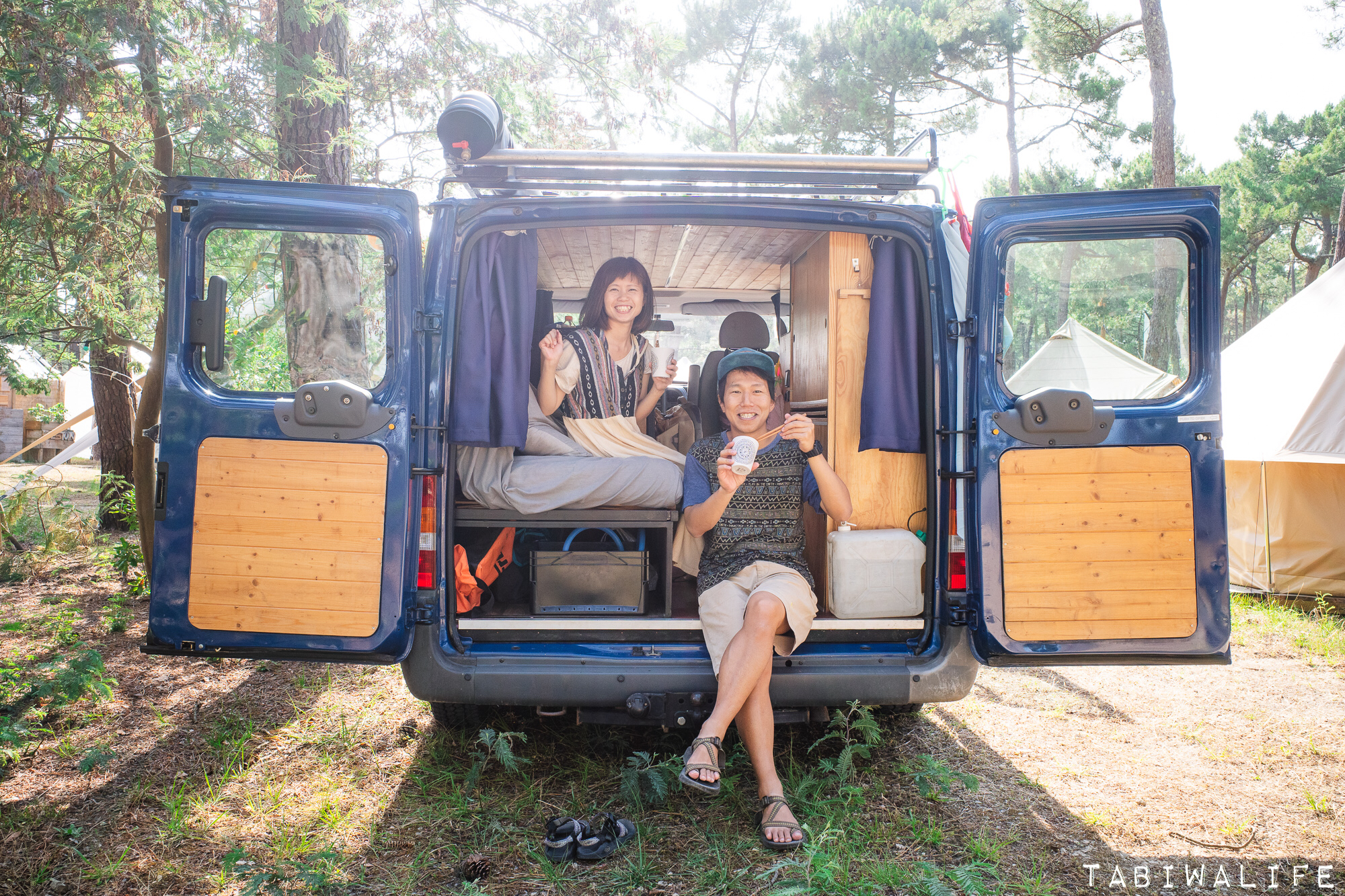 I'm Daichi from the vanlifer couple of Tabiwalife! VANLIFE JAPAN wrote an  interview feature about us before and we're now proud to present the very first entry to the new series about our vanlife.

Our vanlife has been pretty short but we're very pleased to have the opportunity to share with you our experiences together on the road. This is our first time to write so allow us to briefly introduce ourselves again and talk about our experiences prior to our Euro Vanlife!

We are Daichi and Ryo, the traveling couple of Tabiwalife!

We're currently on our third month traveling all over Europe while living the vanlife. In fact, this article was written in a van while traveling in southern France.

Originally, we both had desk jobs back in Japan. Back then, we dreamed about traveling the world for our honeymoon, so we saved as much as possible until we finally got married in May 2015 and consequently quit our jobs. Then, we started traveling the world as a couple in the following month. While traveling, we searched for what we really wanted to do and the kind of lifestyle we wanted for ourselves, and decided to create work for ourselves by writing blogs, putting vlogs on YouTube, and running a website.

"We want to continue as a traveling couple!" "Everyday is our honeymoon until we die!"

We get a lot of patronizing compliments from people whenever we tell them our philosophy, although I have to say that our initial plan was to just go around the world for about a year then go back to Japan and get normal jobs again.

However, the more we learned about the many possible ways of living and the different values that people have, the more we spent time talking about our married life and the more it felt kind of us-centered, for better or worse.

The reason we got into the vanlife was through someone that we just met randomly somewhere. We kind of talked about this in our interview, but to explain it further, we didn't slowly plan to make this lifestyle change. We were simply, "Wow, that sounds awesome! We should try it!" Also, we were already on our world tour at this time. It just seemed like a nice idea to continue traveling together in the future in our own vehicle.

Even though I already had a driver's license at this time, I hadn’t really gotten a chance to actually drive since I'd always been backpacking. So, to be honest, I still haven't quite gotten a hang of it until now. (Laughs) I'm terrible at backing up when parking that even my wife told me to practice some more.

But as we were driving around Kyushu for 3 weeks and camping in our car, we just fell in love with it and thought it would be fantastic if we could do the same thing in Europe.

Now we've been in Europe for three weeks so I'm slowly getting used to driving as well as the life here. At first, though, we were very intimidated. The best thing about the vanlife is the freedom to go anywhere you like, but the streets are quite scary to drive on in here so there are times when I think we should just do the non-moving vanlife. (Laughs) Sometimes I still get surprised by the roads I'm driving on.

And if we even go further back, our decision to take on the Euro vanlife was clouded with doubt. But I thought it was the same as when we went backpacking around the world for our honeymoon. We were scared initially but as we went along, we discovered how much we loved the actualization of our dream.

When we say we love traveling and continue to travel for a long time now, it's not about sightseeing or eating exotic food for us. It's about simply living the life of travel, and through vanlife, we're afforded to move in our own pace.

Euro vanlife is our greatest endeavor!

The biggest problem we had when we were considering our Euro vanlife was the van. Simply wanting to do it isn't going to come to fruition without a van before anything else. But where and how to get it?

At that time, someone we knew told us about a Facebook group for vanlifers in Europe where we immediately posted our need for a van. Suddenly, our notification blew up! We received lots of responses from different people and eventually found someone who'd lend us a van.

Before that I was thinking if we couldn’t rent a van in Europe we'd probably have to buy one in there... but it'd probably be cheaper to just ship one from Japan... etcetera. All that worry disappeared in an instant. (The actual cost of shipping a car from Japan to Europe would shock the bejesus out of you!)

I couldn't wait to jump into the Euro vanlife but at the same time held back by fear from actually doing it. Being unsuccessful in procuring a van after looking into different ways also didn't help motivate me. I started making up excuses and told myself that that was it. I almost allowed myself to fail. (Laughs)

Think of every step as an experiment and just have fun!

I felt more and more uneasy the closer our flight was to Europe. We've been there together but it's our first time to go there as vanlifers so the feeling was very different.

"Can I drive a car with the steering wheel on the left?" "What do we do with no public baths?" "Are the streets safe?"

I decided to brush off all my worries and just wing it. I figured we'd manage once we're there. "Think of every step as an experiment and just have fun," I thought.

But more than anything, the Belgian couple who would be renting us a van have been texting us and telling us about their amazing vanlife. Getting a preview of their lives made us feel more secured and even more determined to live in the moment.

So, are you ready to join us in our Euro vanlife? Stay tuned here on VANLIFE JAPAN to read more about our journey! Until next time♪
この記事をシェアする