Everyone's talking about the "Mobile House": A 20-something office lady's first stay experience

Hello! I'm the self-proclaimed van girl Kaori! Spring has come again and the weather is only getting more pleasant by the day! Now that it's warmer, I'm sure a lot of people are finding new things to do.

Have you ever heard about the "Mobile House?" Actually, there's been a silent boom happening recently caused by this little "hut." (Lol) All jokes aside, it's not really a hut. As the name says, it's literally house on wheels. Pretty small in size and cheaper than a regular house. It's perfect for people interested in the latest trending lifestyle called dualar* ("dual lifer"). *Dualar (Dual Lifer): The keyword trend forecasted by Recruit Sumai Company in December 2018 on "2019 Trend Forecast Residential." Duala refers to the lifestyle of people living in two places - in the city and in the countryside - simultaneously.

Isn't this cutting edge? I'd been curious about it for a while so I tried staying in one myself. If you want to know more about it, stick it through until the end of this article as I write all the very basics here as well as my first stay experience♪

To put it simply, it's a tiny house for traveling. In fact, many people throughout Japan, especially Shiun Tatsumoto and Nariaki Akai, use mobile houses as their bases for their lives and trips.It's basically a type of tiny house that's on wheels and that's fairly compact—and cheap. I think the usual path for many people when buying a house is to take on a mortgage for a fixed location. On the other hand, you can buy a mobile house in just tens of thousands of dollars. That's cheap! You can even buy one together with a regular house. In addition, Yoshihiro Koitani is currently preparing a mobile house rental business.

I borrowed a mobile house from Yoshihiro Koitani and tried camping with it myself for one day.

The first time I ever saw a mobile house was "Co-Re! House in Shisui" where you can camping near Narita International Airport. It's a very unusual sight in an urban setting that you could certainly feel the eyes of passers-by and the clicks of cameras on you while inside. It was truly unusual and attention grabbing. On the other hand, the one I borrowed was basically a small truck with a box. I was really surprised a former country girl who used to work in a farm owned it. Like, "Wow... this really is your house?" kind of thing. (Lol)

The "box" in the back of the truck was made of wood, but pretty sturdy and secure. There's a security lock in the back door that required a passcode. It actually felt really safe even for women. I opened the door and as soon as I entered I thought it was quite spacious as well. There were windows and a loft, and also depth to it just like a bedroom in a house. Anyway, that’s just a little peek inside the "box." I went to the camping area later that night.

It was a small truck but I was glad it had automatic transmission. I did have to be careful about not driving too fast, the wind, and low-clearance tunnels or bridges because of the big load it's carrying in the back; however, it was surprisingly easy to drive even in high speed. As soon as I arrived at the camping ground, I started prepping for bed and, of course, charged my phone—very important. Actually, this mobile house had solar panels(200W), which recharged the battery in the car. I used up some of this.

Unexpectedly I can sleep well in the mobile house

I shut the curtains because I can never sleep unless it’s completely dark. The ceiling in the loft was a little too low for me, but the ground was long enough even for a tall man to extend his legs. The box is said to have insulation, and it was really warm because I was able to turn on the heater. You can sleep soundly as if you were in your bedroom.

In the morning, you wake up to the rays of sun peeking through the curtains. And if you put up the awning on the side of the truck and take out the table, it's like being in a little café. The sense of openness made my work easier. Nothing is more luxurious than eating a hearty breakfast on a fine sunny day.

What do you think of the mobile house that I talked about here? I personally experienced mobile house as a hotel, but really, mobile houses have all the hidden potentials to be the next-generation house slash office, event room, or store. I've become very interested in mobile houses now after having an amazing firsthand experience, and I also want to tell everyone next time about the past mobile house events that I've found. 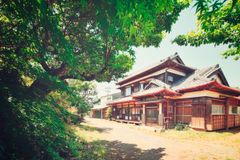 Camping
A woman car camping alone? Here are some tips for a safe and worry-free night!